If you're a Charleston bride who hopes to tie the knot with her toes in the sand, you've got to check out the Charleston Harbor Resort and Marina.  This beautiful resort offers multiple ceremony options with waterfront views.  The property is in Mt. Pleasant, just over the Cooper River Bridge, and overlooks downtown.  Today's couple, Jena + Jamie, held their wedding at the resort this past summer and kindly told us all the details...
Tell us a little bit about how you met your husband...
Jamie and I met at church.  He approached a mutual friend of ours and introduced himself to me.  It wasn’t but a couple of hours before he was calling his best friend to set up a BBQ for later that week.  Jamie had lost his wife unexpectedly several months before and wasn’t sure he was ready to start dating but was captivated by my smile so he and his friend conjured up this informal BBQ to feel out the waters.  They even had a secret code with each other to end the BBQ and cut the evening short, or keep me around a little longer.  Needless to say I got the approval handshake and the rest is history.  Jamie and I dated for 2 years almost to the day before tying the knot. 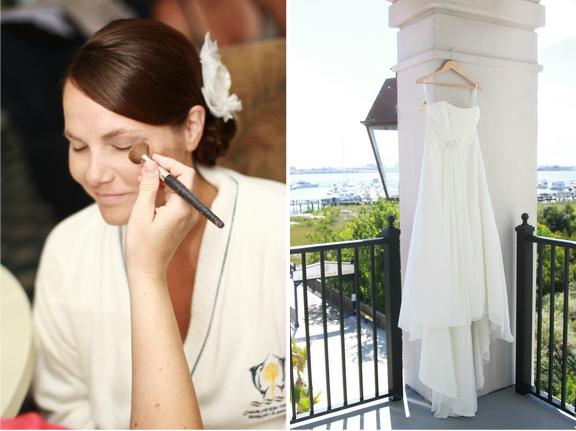 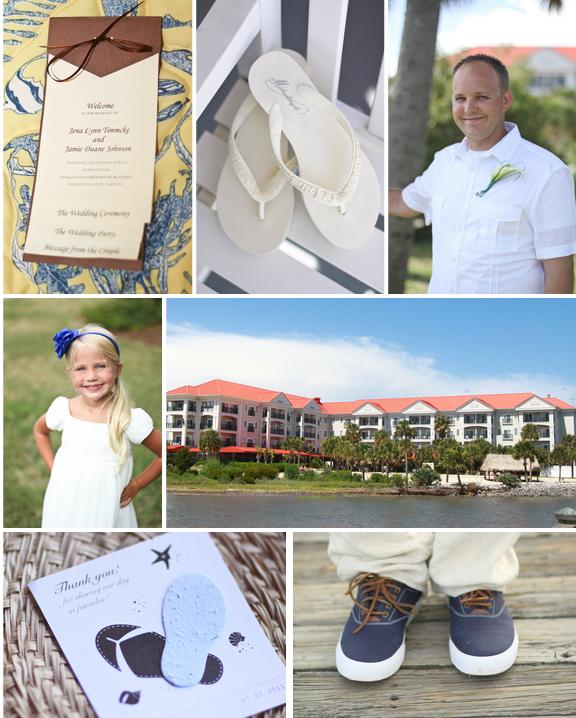 How did he propose?  How long were you engaged for?
Jamie is a pilot and had planned to take me to Telluride for the day (Telluride is that one city for Jamie and I that holds many memorable moments).  However, on our way into the airport Jamie got the news that the flight was sold out so he had to quickly change his plans.  To cover his tracks he even suggested that we go look at rings as one of our fall back options.  Nonchalantly Jamie suggested that we break in our new jeep and take it up into the mountains to play in the snow.  Excited to hit the trails we headed for the mountains.  After playing around in the snow for a while Jamie adventured off on a trail and seemed very determined to get us past a very stubborn snow wall, so much so he used the winch get us on our merry way.  We finally reached a point where Jamie could not winch us any further so we decided to get out and admire God’s beautiful creation.  I began to take pictures of the scenery and realized that Jamie was no where in sight so I began to walk towards this opening.  When I turned the corner I saw Jamie standing on a small hill looking at the mountains.  He started pointing out different things, the mountains in one direction, an interesting shaped tree in the other direction and then a rock he found.  When I turned around to look at rock I was literally blinded by something super shinny.  It was at this point I realized that Jamie was down on his knee in the mud asking me to marry him.  I was in complete shock, here I was thinking I might get to go look at rings, I didn’t think I would be wearing one on my drive back down the mountains.  That beautiful day was Friday April 13th, 2011 we would later be married on July 7th, 2011. 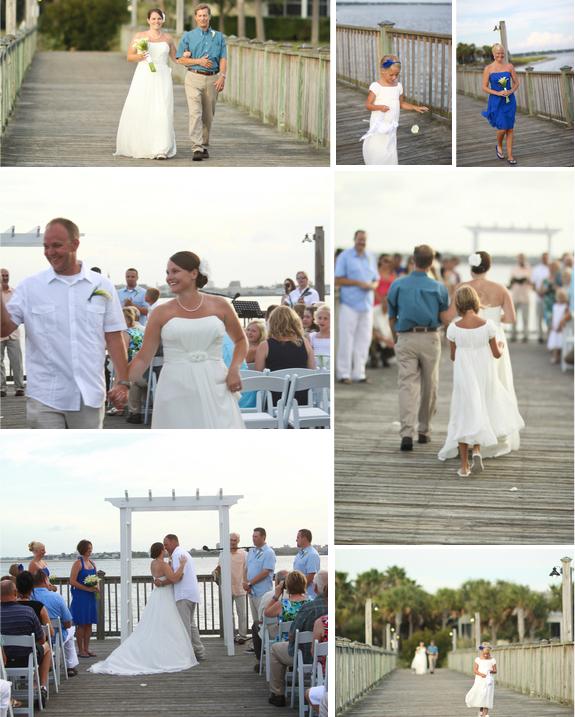 Your wedding was filled with gorgeous details.  Did any have special meaning? What was your favorite?
In memory of my Nana, we had a blue geranium for the ceremony.  After my Nana passed away from breast cancer, I knew that I would have a blue geranium at my wedding for her since this way my favorite flower in her backyard when I was growing up.
Another favorite detail of ours was the sand ceremony.  When Jamie and I got married we weren’t just joining two lives, but five.  We weren’t just becoming a husband and wife but a family and it was important to us and our children that we symbolize that we are all blending together to make a new family, one brought together by Christ. 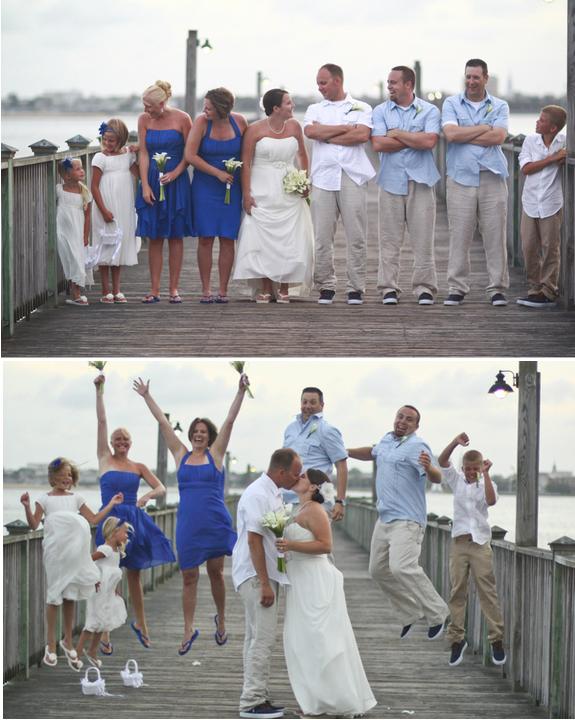 Out of the entire day, what was the most memorable moment?
The most memorable moment was when I first saw Jamie.  We decided to do a photo session called the first look (which I highly recommend) before the actual ceremony.  This offered us some personal time to see each other and have time alone before joining the masses.  One thing I remember about the picture setting is that Jamie kept making fun of me because I would make this silly laugh while Sarah was taking our pictures.  He kept telling me to stop laughing like that but it must have put a perfect smile on my face because when we got our pictures back I was the one with the perfect smile and well he… not so much! 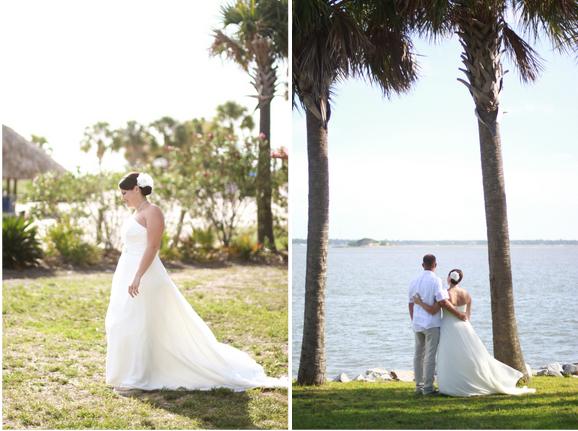 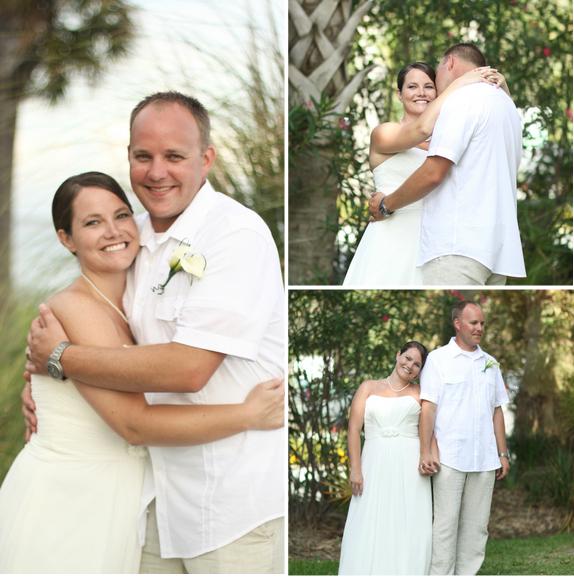 Why did you choose to have A Lowcountry Wedding?
We weren’t originally planning to have a Lowcountry wedding especially since I grew up in and he in .  Needless to say neither one of us had dreamed of a southern wedding, however we did know that we wanted to be married on the beach.  In our search to find the setting which would allow for a majority of our family to attend we decided to look into a wedding spot.  After all the details were planned it ended up being what southerners refer to as “lowcountry” however, that was not our original plan. 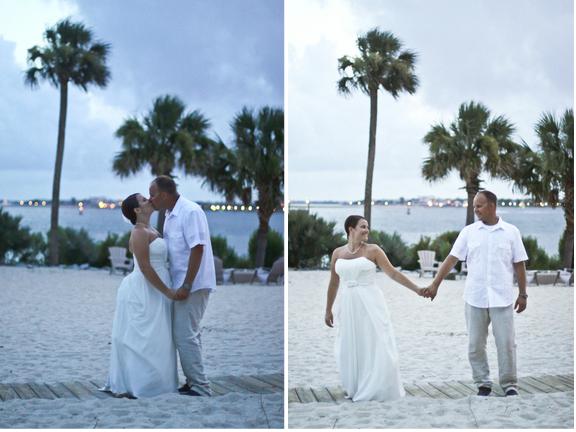 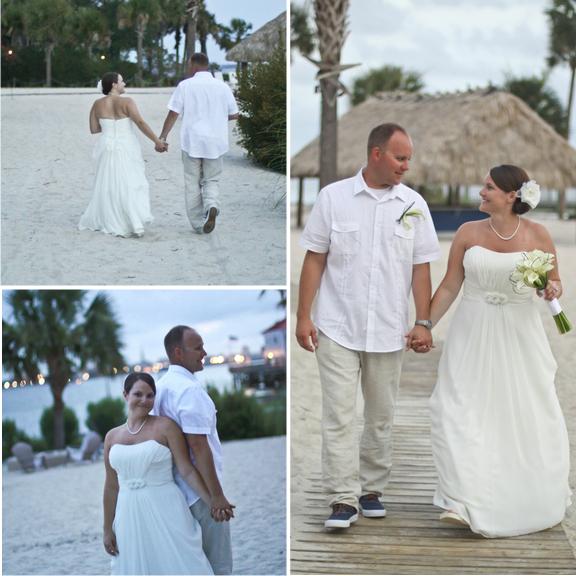 How did you choose your venue?
Jamie and I knew that we wanted to be married on the water.  After doing some internet searching we had picked a couple of locations that we thought would work.  Our final decision to have it at the Charleston Harbor Resort and Marina was confirmed after my parents visited the different venues.  While the resort wasn’t directly on the beach, it had a beach and pier option for our ceremony of which we ended up going with the pier. 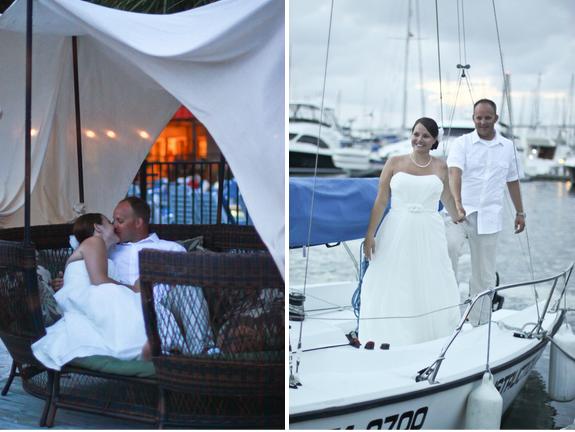 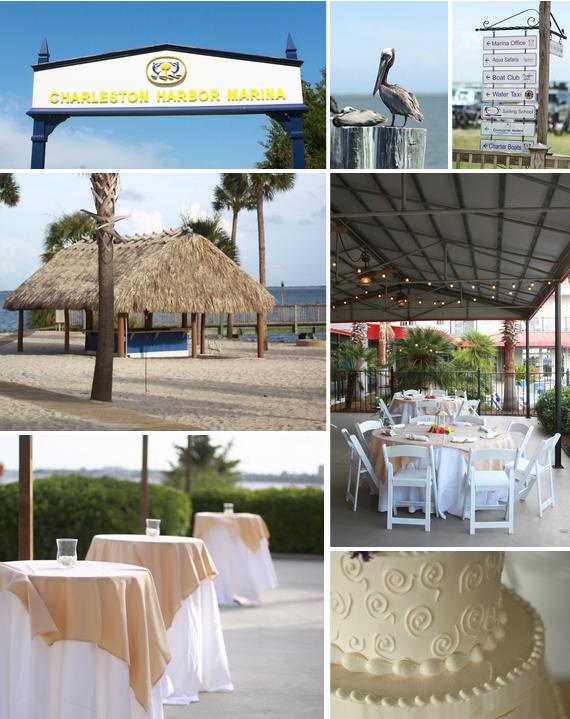 Tell us a little bit about your menu.  Did you add any Lowcountry elements?
All the food items were lowcountry.  We had pulled pork, baked beans, coleslaw, and mac and cheese.  It doesn’t get any more lowcountry than that! 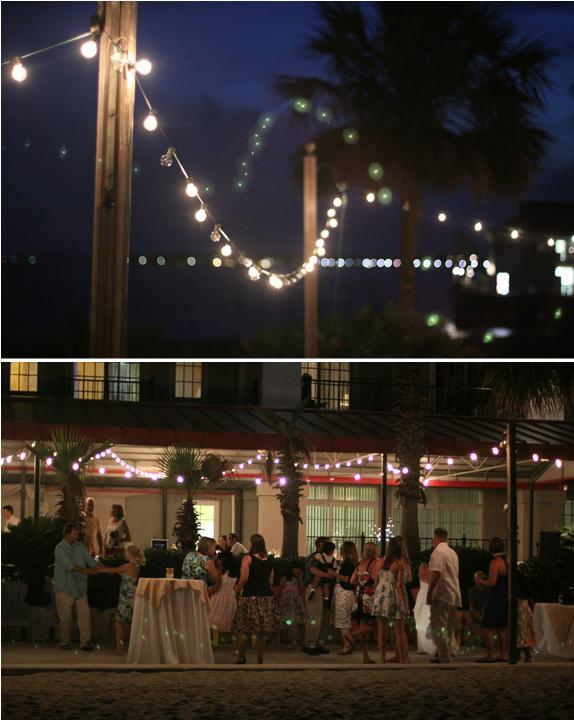 Looking back on your engagement and wedding, is there any advice you would give to brides in the planning process?
Remember that when all is said and done the most important thing is that you are sharing your special day with people who mean the most to you.  When all is said and done the flowers will wither, the food will be forgotten, but the thing that will not fade is the memories with the one’s who are there with you.  On the day of the wedding don’t stress about what isn’t done or what you might have missed…if it’s not taken care of yet then it’s not important.  Enjoy your day as the bride, don’t try to be the planner or the organizer, just enjoy your day with your future husband and remember that the party won’t go on without you.  Don’t stress about where you need to be when, I promise, they won’t start the festivities without you, the star of the party, the bride! 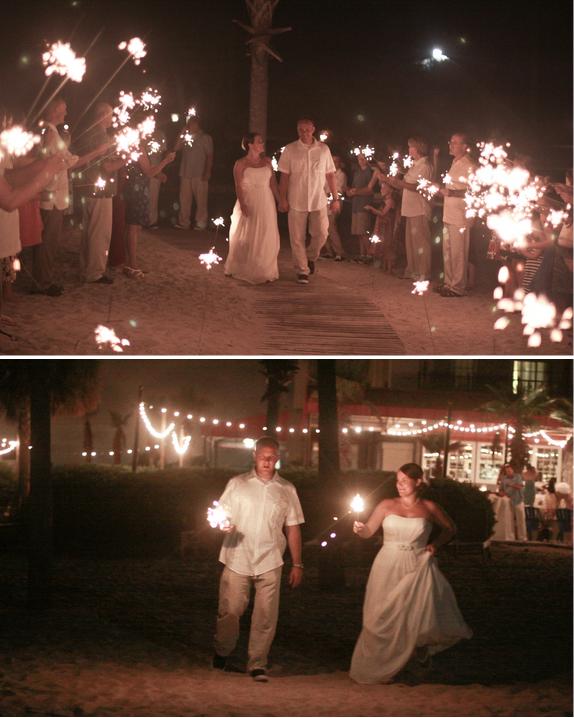 ALW
WE'VE MOVED! You can find us now at www.alowcountrywed.com! 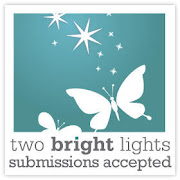 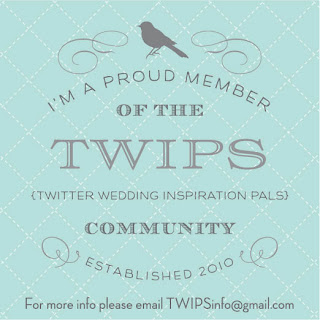